Dékor Refills are actually one long continuous diaper pail liner which means you can empty as often as you want, after that one really stinky change, or when the diaper pail is totally stuffed. Emptying the diaper pail more frequently will help keep odors in your nursery to a minimum. The design of the Dékor refill puts you in control of how much refill you want to use with each empty.

Dékor refills are designed to not only provide protection from odor, but to save you money. Because Dékor refills hold more diapers per refill than the competition you will save money through your diapering years by simply choosing Dékor.

We are talking about disposable diapers here, but at least the Dékor refills are made of 20% recycled post consumer material. You can also use ONLY what you need without the EXTRA WASTE of other "trash" bags, meaning you can change your bag after one stinky diaper or after the diaper pail is fully loaded and still only use what you need. Because you are using less refill per diaper with Dékor, you are making less of an impact on landfills, and in turn the environment.

Dékor refills are also available in a biodegradable formula that helps them to break down quicker than ordinary refills. As defined (ASTM 1991), "A Biodegradeable Plastic is defined as a degradable plastic in which the degradation results from the action of naturally occuring microorganisms such as bacteria, fungi, and algae."

See our Certificate of Biodegradability

Dékor diaper pails use a reusable cartridge system and thereby eliminating extra plastic that would go into our landfills. 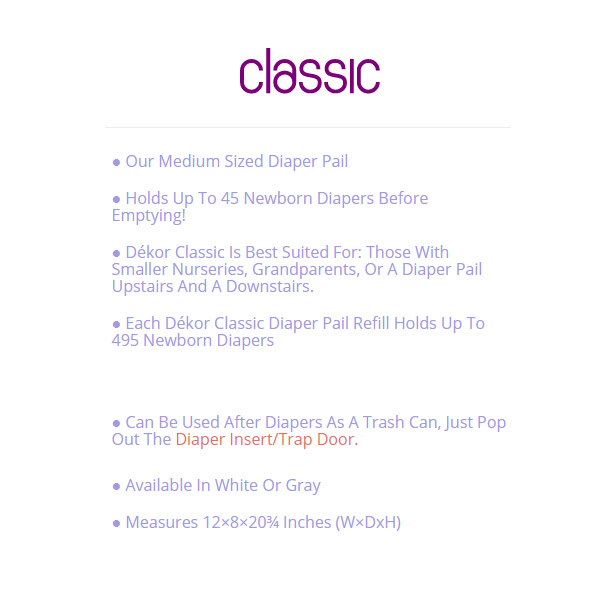 Sign up and be the first to know about our promotions, offers, coupons, as well as our giveaways and events, both in-store and online.

Don't worry, you can unsubscribe at any time.